Wi-Fi equipment based on the new 802.11ac standard—often called Gigabit Wi-Fi—has been on the market for nearly two years. These products offer greater bandwidth and other improvements over gear based on the older 802.11n specification, but they don't implement one of the most impressive features of 11ac.

It was simply too complicated to deploy all the upgrades at once, hardware makers say. As a result, 11ac networks actually waste a lot of capacity when serving devices like smartphones and tablets. This shortcoming should be fixed over the next year with new networking equipment and upgrades to end-user devices. Once everything is in place, Wi-Fi networks will be better able to serve lots of devices at once, particularly the mobile devices that every single person in the US seemingly has in his or her hands every minute of the day. 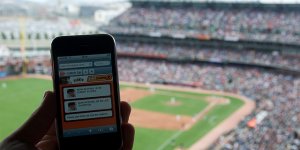 As cellular and WiFi get congested, fans might actually have to watch the game.

The soon-to-be-deployed technology is called MU-MIMO (multi-user, multiple-input and multiple-output), which is like a wireless "switch" that sends different data to different receivers at the same time.

It's powered by multi-user beamforming, an improvement over the single-user beamforming found in first-generation 11ac products. MU-MIMO will let wireless access points send data streams of up to 433Mbps to at least three users simultaneously, for a total of 1.3Gbps or more. First-generation 11ac equipment without MU-MIMO could send those streams of data simultaneously, but only to one device—and only if that device was capable of receiving multiple streams. Many computers could handle the influx of data, but smartphones and tablets generally couldn't. That meant they could only receive one stream (occasionally two) because of power limitations.

It's hard to imagine a single smartphone or tablet needing to receive more than 433Mbps of data. But the fact that MU-MIMO-powered Wi-Fi will be able to serve more users simultaneously could bring huge benefits to large-scale wireless networks, like those in airports, convention centers, and sports stadiums. Real-world throughput will end up being something lower than 433Mbps to each user because of networking overhead and other limitations, but given that a high-definition Netflix stream is just 5Mbps, there isn't much reason to worry about that yet.

Beamforming was part of 802.11n, the previous Wi-Fi version, but 11ac defines it in more detail, making interoperability between access points and end-user devices more likely. Separately, beamforming plays an important role in "WiGig," which is based on the 802.11ad specification and can send up to 7Gbps transmissions over very short distances.

"Traditionally, access points have been equipped with omnidirectional antennas, which are so named because they send energy in all directions," wrote Wi-Fi expert Matthew Gast in the book, 802.11ac: A Survival Guide. (Gast also oversees development of the software that powers Aerohive Networks' equipment.) "An alternative method of transmission is to focus energy toward a receiver, a process called beamforming. Provided the AP [access point] has sufficient information to send the radio energy preferentially in one direction, it is possible to reach farther."

"Prior to the introduction of multi-user beamforming, all 802.11 devices could send a transmission to only one device at a time," wrote Gast, who also led development of 802.11-2012.

"Don't get me wrong, 433Mbps is nice," Gast told Ars in a phone interview. "But there's an unused capacity because the AP is capable of transmitting three 433Mbps streams, but my phone can only receive one. You lose two-thirds of the capacity when this happens."

Creating mobile devices that can use multiple data streams is hard "because you have to do a fair amount of signal processing" and that eats up processing power and thus battery life. Besides smartphones and tablets, Nest thermostats and Apple TV set-top boxes are single-stream, Gast noted. That's also true of wearable devices, which don't have room for a huge battery.

"All of those devices that are cool are designed to be low power and they're single-stream," Gast said. "In your house you probably have a laptop, but everything else is a single-stream device and therefore is the right sort of device to benefit from multi-user MIMO." (One notable exception is the Samsung Galaxy S5, which does two-stream 802.11ac.)

Even when 11ac routers are serving multiple single-stream devices, it switches between devices so fast that normal humans typically won't notice. A user watching a streaming video gets enough of a buffer that the video won't stop while people on the other side of the room are being served.

MU-MIMO should bring big improvements to public Wi-Fi networks that serve hundreds of people at a time, though. And in a few years, home networks could be serving surprisingly large numbers of devices.

"We can support up to 512 clients" with top-end gear designed for heavily used networks, Todd Antes, VP of product management for Qualcomm Atheros, told Ars. "If everybody's device was MU-MIMO-capable, our scheduling algorithm would serve them three at a time. It would go through that client population, in theory, 2.5 to 3 times faster in the same network capacity as would today's AP."

Even devices that aren't MU-MIMO-capable could benefit, since MU-MIMO should free up more time and bandwidth for networks to serve older gadgets.

Qualcomm announced its 802.11ac chips with MU-MIMO in early April. Quantenna, another chipmaker, announced silicon with MU-MIMO technology nearly a year ago, and Asus said in January that it would use Quantenna's chips to offer a 1.7Gbps, four-stream home router. The Asus router isn't for sale yet, but it's expected to come out in the middle of this year.

While consumer-grade routers will come out this year, enterprise-class gear for the biggest networks is more complicated to build. It probably won't come out until 2015.

And although you should be able to buy a multi-user beamforming router for your home within a few months, it'll probably take longer to acquire enough gadgets to make the purchase worth it for most consumers. Your gadgets may or may not be able to currently receive MU-MIMO transmissions—if you're lucky, just a software update will be enough.

"Since last year we've been building in MU-MIMO receive capability [into chips]," Antes said. "Customers that are already building products with those, what you can imagine is in the near future they would be able to turn on that capability with a software update to the product."

Qualcomm's newer chips are being designed into "over 250 smartphones and tablets from OEMs including Samsung, Nokia, HTC, Asus, Sony, and many others," the company said. "Some models are already available, but many more are coming to market later this year."

Qualcomm is sampling its chips for routers and gateways to manufacturers. It's also offering 2-stream 11ac chips for tablets and high-end smartphones, and 1-stream chips for lower-power phones and tablets. TVs, set-top boxes, and automobiles are getting 2-stream chips from Qualcomm.