Not long after Robert Mueller was appointed special counsel, Donald Trump declared it would be a "violation" for the investigation to touch the Trump Organization or his family finances. Pressed on whether he would fire Mueller if that line were crossed, Trump said: "I can't answer that question because I don't think it's going to happen."

Now, it looks like it is going to happen. But the public face of the investigation of Trump's finances won't be Mueller. Leading the charge will be someone Trump cannot fire: California representative Adam Schiff, newly installed chairman of the House intelligence committee and a former federal prosecutor himself.

With Democrats having taken over the House, Trump faces a pack of potential antagonists. Newly installed chairs are ramping up plans to scrutinize corruption inside the Trump administration, investigate alleged attempts to profit from the presidency, and to review policies such as family border separations.

But most threatening for Trump personally might be the investigations led by Schiff, who has said he plans to drive directly at an area the president has sought to fence off: the details of his businesses, his lenders, and his partners in the US and abroad.

"First and foremost, I would say that we need to get to the bottom of anything that could warp our national security policy in a way that is antithetical to the interest of the country," Schiff told the Lawfare podcast. "So anything that has a continuing ability to influence the actions of the president, we need to know, as policymakers, to protect the country.

"One of the issues that has continued to concern me are the persistent allegations that the Trumps, when they couldn't get money from US banks, were laundering Russian money. If that is true, that would be more powerful compromise than any salacious video tape or any aborted Trump tower deal."

Schiff might break new ground by using his power to subpoena documents from banks, phone companies or other sources, said Andy Wright, a former counsel to the House oversight committee and founding editor of the Just Security blog. 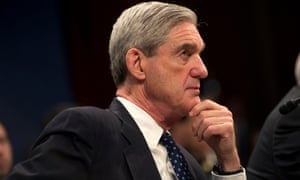 Robert Mueller is investigating Russian interference in the 2016 US election, and links between the Trump campaign and Moscow. Photograph: Chris Maddaloni/CQ-Roll Call,Inc.

"I think that there's actually going to be quite a bit of fruitful evidence turned up," Wright said. "I don't know what the evidence is, whether it's going to be incriminating or not. But I don't think that the sort of conventional wisdom, that Trump's just going to drag his feet or strike a 'warlike posture', is going to be that effective, because the smart investigators aren't going to go directly at him. They're going to go to third parties first."

One of the first matters he plans to investigate, Schiff told NBC last month, is the Trump Organization's relationship with Deutsche Bank, for a time reportedly Trump's exclusive lender, which was fined $700m in 2017 for allowing money laundering.

"The concern about Deutsche Bank is that they have a history of laundering Russian money," Schiff said. "And this, apparently, was the one bank that was willing to do business with the Trump Organization. If this is a form of compromise, it needs to be exposed."

A graduate of Stanford and Harvard, Schiff, 58, began his career as an assistant US attorney in the Los Angeles district, where he successfully prosecuted Richard Miller, the first FBI agent to be convicted of espionage. As a young politician, Schiff was cultivated by Nancy Pelosi, then head of California's congressional delegation, now, again, speaker of the House.

Schiff is a triathlete, a screenwriter and a vegan. He also likes to go on television, where he has caught the attention of the president, who last year responded to a critique with a tweet mocking the congressman's last name and floating a misleading notion about the statute governing the special counsel:

While Schiff has shown he can fire back at Trump, he will need to steer clear of such partisan warfare to be an effective committee chairman, said Jamil N Jaffer, founder of the National Security Institute at the Antonin Scalia Law School at George Mason University and a former senior counsel to the committee Schiff now leads.

"Schiff has an opportunity now to try and change that tone, because as the chairman he can set the tone," Jaffer said. "We'll see if he's able to do that successfully. We're in a very nasty environment in Washington DC right now. The atmosphere is poisonous after the 2016 election. Everyone has a responsibility to get past that."

Schiff takes over a committee that has been badly tarnished in the eyes of the public and, significantly, in the regard of the intelligence community. Under Devin Nunes, a Trump confidant who served on the transition team, the committee raised hackles by releasing classified material describing scrutiny of a former Trump aide.

Schiff has called the episode "a spectacular breach of a compact we have with the intelligence community" and said "we're going to have to restore that".

"If the committee does its job in the right manner, it shouldn't be antagonistic to any particular president or the executive branch generally," Jaffer said. "It should be doing good, effective oversight."

Under Nunes, the committee ended conversations with the special counsel's office about what witnesses might be called and other matters. Schiff has said he will restore that communication.

On Sunday, he told CNN the committee would be handing over transcripts of closed-door testimony, something Republican leaders did not do and which could place in jeopardy Trump aides including Donald Trump Jr, Jared Kushner and Roger Stone.

But the role of Congress is fundamentally different from the special counsel's job, Schiff told Lawfare, especially given concerns that a report issued by Mueller might in some way be suppressed in a justice department run by Whitaker, apparently a staunch Trump loyalist.

"I think ultimately it will fall on Congress to make sure that the American people will get to hear the full story," Schiff said. "Either through our own investigation or Bob Mueller's or a combination of both.

"The American people have the right to know, and I think in many cases the need to know, what happened."