"Who is responsible for us?" asks Sarah Ibrahim, 31, one of more than 2,000 foreign women and children detained at camps in northern Syria with no foreseeable way out.CreditIvor Prickett for The New York Times

ROJ CAMP, Syria — When her husband uprooted their family from Morocco to live under the Islamic State in Syria, Sarah Ibrahim had little choice but to go along. After he disappeared — she believes he was killed in an airstrike on a prison — she fled with her two sons.

They were captured last year and have been held ever since in this dusty, sweltering detention camp in northeastern Syria. They are among the more than 2,000 foreign women and children being held in such camps, trapped in a legal and political limbo with no foreseeable way out.

Their home countries do not want them back, fearing they could spread radical Islamist ideology. The Kurdish authorities that administer this stateless war zone do not want them either, and say it is not their job to indefinitely detain citizens of other countries.

"You told us to leave ISIS and we left, but we are still considered ISIS," said Ms. Ibrahim, 31, her frustration dissolving into tears. "So who is responsible for us? Who will determine our fate?"

The so-called caliphate of the Islamic State, which once stretched across large swaths of Syria and Iraq, drew tens of thousands of partisans from around the world who came to fight or to live in what was billed as a pure Islamic society. Among them were many women, some who were brought by their husbands or fathers. Others came alone and married, or were forced to marry, after they arrived.

But as the caliphate collapsed under a military campaign by Kurdish militias backed by a United States-led military coalition, many of the men were killed or captured. The wives and children who survived ended up in camps like this, unwanted by anyone.

"We are working responsibly, but the international community is trying to flee from its responsibilities," said Abdul-Karim Omar, an official in the local administration charged with persuading governments to take their citizens back, an effort he acknowledges has not been very successful.

"This is a ball of fire that everyone is trying to get rid of and threw to us," he said.

The absence of any plan to deal with the detainees is part of the wider disorder in the lands liberated from the jihadists. In Iraq, many of the women who once lived among them face swift trials and death sentences on charges of supporting the Islamic State.

In Syria, they are effectively prisoners in dingy camps in an area under the control of no internationally recognized authority that might be able to press their home countries to take them back.

On a rare visit to the largest of these camps, known as Roj, Kurdish officials allowed us to interview Arab women held there but refused to let us interview or photograph Western women for fear it would complicate negotiations with their governments about their return home. 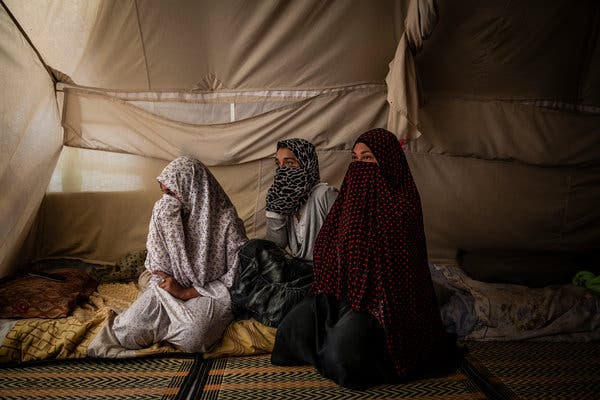 An Egyptian woman and her daughters inside their tent at Roj Camp. The camp's 1,400 foreigners come from about 40 countries, including Turkey, Tunisia, Russia and the United States.CreditIvor Prickett for The New York Times

But during a walk through the camp, we spoke informally with women from France, Germany, Denmark, Holland and a number of Arab counties. Kurdish officials did not let us ask the Western women their names.

Some said their husbands had forced them to go to Syria. Others said the trip had been a mistake that their children were unjustly paying the price for.

Near a bank of latrines, three women — two French and one German — dragged their toddlers down a rocky lane in plastic crates on wheels.

"Of course we made mistakes, but anyone can make a mistake," said the German woman, a dark blue head scarf around her pale face.

She was 24, had come to Syria with her German husband and had three children, she said. Like many women in the camp, she acknowledged that she had come voluntarily, but said that life under the jihadists had been worse than she expected and that once there it was impossible to flee.

"There was no way to go," she said. "Either you go to prison or they would kill you."

One of the Frenchwomen, a 28-year-old mother of three, called her Syria adventure an enormous mistake.

"Don't we deserve, what do you call it, redemption?" she asked.

Foreign governments, including the United States, provide some aid to the local administration, but it is a pittance compared with what they spent on the military campaign. And the issue of detainees is particularly thorny, given the security risks of holding seasoned jihadists and the women and children who lived with them in a war zone.

The local administration has imprisoned more than 400 foreign fighters, Mr. Omar, the local official, said, and the United States is helping finance their detention to prevent prison breaks.

But the administration has received little help in dealing with the women and children who are now held in three camps.

It has established ad hoc courts to try Syrians for crimes committed under the Islamic State, but it does not try foreigners. And the women and children in the camps have not been accused of crimes.

The roughly 1,400 foreigners at Roj Camp are from about 40 countries, including Turkey, Tunisia, Russia and the United States, said Rasheed Omar, a camp supervisor. The women are generally well behaved, he said, although it is hard to determine what roles they may have performed under the jihadists and how much of the ideology they still endorse.

"There are some of them who are still following the ideology, and there are some who came because they thought they were coming to heaven and found out it was hell," he said.

More than 900 children, many of them toddlers, are being held at Roj Camp.CreditIvor Prickett for The New York Times

Ms. Ibrahim, for instance, said she was horrified by the jihadists' public executions, their dictates about women's dress and their ban on listening to music, even in her own home.

The biggest concern, however, is the children, many of them toddlers, who did not choose to join the jihadists. There are more than 900 children at Roj Camp, many with health problems, who have been out of school for years and lack any kind of official citizenship.

Most of the Europeans want to go home, even if that means standing trial, but few of the Arabs do, fearing that they will be tortured or executed.

Nadim Houry, director of the terrorism and counterterrorism program for Human Rights Watch, said the women and children were stuck in a "legal void." While international law would require their countries to take them in if they made their way home, it does not oblige their governments to actively repatriate them.

Meanwhile, they were not awaiting trial for crimes they may have committed, nor were they free to leave.

Mr. Houry dismissed as excuses the reasons governments have given for not taking their people back, such as a lack of consular facilities or security concerns, saying that it was really a lack of political will. If the women were accused of crimes, they could be tried at home and imprisoned if needed, he said.

"Some of them may have committed crimes, but most of them were probably housewives, so you can't just lump them together with people who committed beheadings," he said. "What is troubling is that lots of them are children, and young children at that."

So far, few countries have taken back their citizens.

Russia repatriated about 35 women and children, and Indonesia took back a family of about 15 people, said Mr. Omar, the local official. He said he was talking to Canada and Denmark about their citizens, but no returns had been finalized. Many other countries just ignored his overtures.

Dua Mohammed, 44, said she had come from Egypt to Syria with her husband, who had been attracted to the idea of the Islamic state. "But what we saw there in reality was not what we expected," she said. "What we lived there was not what we had come for."

Last year, her family managed to flee and was detained by the Syrian Democratic Forces, the Kurdish-led militia that is working with a United States-led coalition to fight the jihadists.

She ended up in the camp with her four children, ages 6 to 15, and her husband was thrown in prison, she said. She hasn't heard from him since.

"We made a mistake, but everyone in the world makes mistakes," she said. "How long can we pay the price for a mistake? For our whole lives?"

A version of this article appears in print on , on Page A1 of the New York edition with the headline: Scorned and Trapped: Wives and Children of ISIS. Order Reprints | Today's Paper | Subscribe