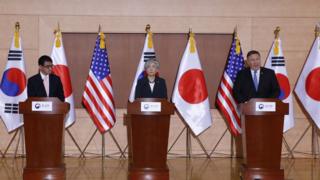 Image copyright EPA Image caption Mr Pompeo said the alliance between the US, Japan and South Korea was "ironclad"

North Korea will not see any economic sanctions lifted until it has demonstrated "complete denuclearisation", US Secretary of State Mike Pompeo has said.

Mr Pompeo was speaking at a press conference in Seoul with his South Korean and Japanese counterparts.

It comes days after President Donald Trump and Kim Jong-un held a historic summit in Singapore.

The leaders signed a statement pledging to establish a new relationship.

Mr Kim also reaffirmed its previous promises to work towards the "complete denuclearisation of the Korean peninsula".

But there has been deep scepticism about the agreement, with observers saying it lacked detail on how North Korea would give up its nuclear weapons and how that process would be verified.

Mr Pompeo travelled from Singapore to South Korea to brief the US's regional allies on the summit, and on Mr Trump's surprise announcement that he was ending routine US-South Korea military drills.

He said the summit had marked a "turning point" in the relationship between the US and North Korea.

Mr Pompeo dismissed a report by North Korean state media that indicated the US would grant concessions to Pyongyang for gradual progress.

He said the US remained "committed to achieving the complete, verifiable and irreversible denuclearisation of North Korea".

These exact terms were not specified in the joint statement signed by Mr Trump and Mr Kim in Singapore, which only made reference to "complete denuclearisation".

Mr Trump had said after his meeting with the North Korean leader that sanctions – which place stringent restrictions on how North Korea can interact with the outside world – would remain in effect until "the nukes are no longer a factor", but it was unclear exactly what that meant.

"At a certain point I look forward to taking them off and they will come off when we know we are down the road," he told a news conference on Tuesday. 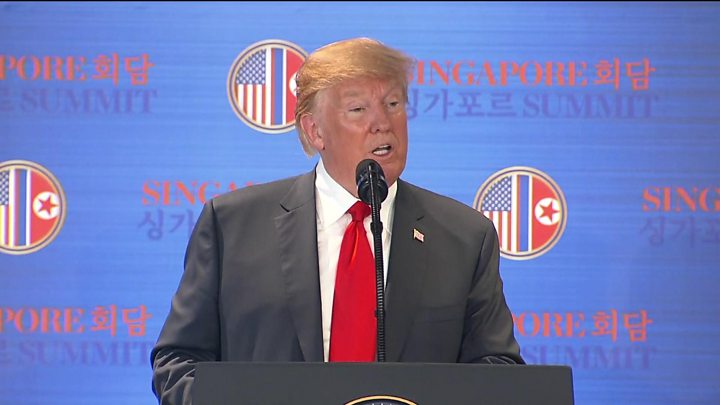 Mr Pompeo also insisted the alliance between the US, South Korea and Japan remained "ironclad", despite Mr Trump's announcement about ending military drills.

South Korea and Japan have always said the drills – which infuriate North Korea – are necessary to ensure their security.

Just landed – a long trip, but everybody can now feel much safer than the day I took office. There is no longer a Nuclear Threat from North Korea. Meeting with Kim Jong Un was an interesting and very positive experience. North Korea has great potential for the future!

South Korea's Foreign Minister Kang Kyung-wha echoed Mr Trump, saying the relationship between Washington and Seoul was as "robust as ever".

Her Japanese counterpart Taro Kono called the summit the "beginning of a challenging yet significant process", saying that the three countries would "continue our joint efforts".

The summit in Singapore was the first-ever between a sitting leader of the US and North Korea.

North Korea has been isolated on the international stage for decades – with brief bursts of diplomacy – for its appalling human rights record and its relentless pursuit of nuclear weapons.

It has long sought a meeting with a US president, something it felt would give legitimacy to the leadership.

Activists have said they were disappointed that Mr Trump did not challenge Mr Kim on the human rights situation.

Mr Trump tweeted on Wednesday night that it had been "interesting and very positive" meeting.

He declared there was "no longer a Nuclear Threat from North Korea" and that he could see "great potential" in the country.