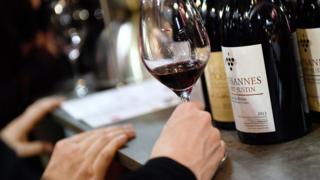 Trade group the International Organisation of Vine and Wine (OIV) has estimated output will reach 259.5m hectolitres (mhl) this year – a fall of 5% compared with 2015.

This would be among the three poorest years for output since 2000, it added.

However, it said Australia, New Zealand and the US would all see output rise.

In Europe, Italy is again set to be the world's leading producer, even though output is expected to fall 2% this year to 48.8 mhl.

But in France – the number two producer – the OIV said production was likely to fall 12% after vineyards endured frost and hailstorms in the spring, then drought in the summer.

In South America, production was also hit by "climatic events".

South Africa, meanwhile, is on track to report a bruising 19% fall in production – but other New World producers are doing better.

The OIV said Australia was expected to see a 5% rise in production, New Zealand a 34% jump and the US – the world's fourth-largest producer of wine – growth of 2%.